Iron Chef Masaharu Morimoto’s restaurant at the edge of New York City’s Chelsea Market earned only one star in the New York Times in 2006, calling the restaurant a “big fish in a big pond.”

This is why I don’t snub restaurants simply based off yelp, magazine or newspaper reviews. I’ll admit I was a little apprehensive about visiting Morimoto’s after reading Frank Bruni’s review, wanting to try WD-50, Marea or Momofuku during my two-day stay instead–but my boyfriend really wanted to try the Iron Chef’s restaurant, and I was curious to see what the celebrity chef had up his sleeve. At Morimoto’s, I ended up finding the silkiest chawanmushi and the best bowl of chirashi I’ve ever had–something I’d definitely go back for if it’s still on the menu. 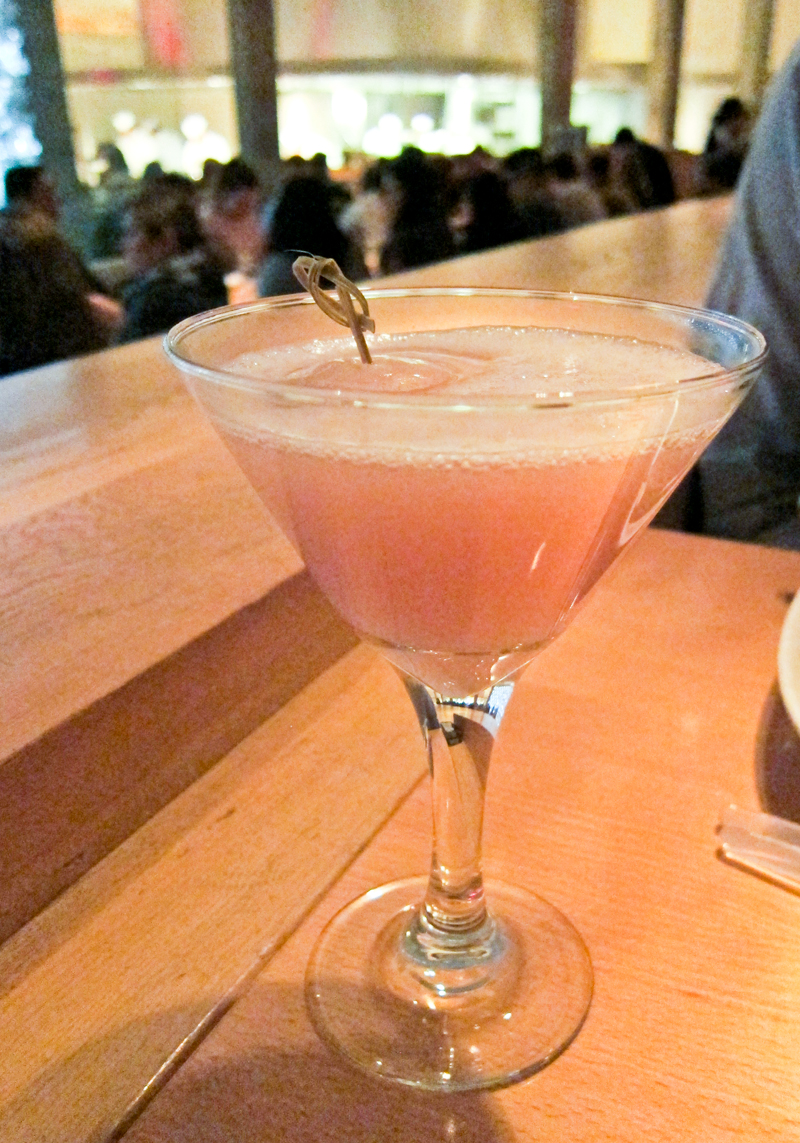 Lychee is an Asian tropical berry with rough, pink skin and delicate white pulp. The Lychee cocktail at Morimoto’s is made with vanilla smirnoff, cranberry juice, lemon juice, and a bulb of peeled and pitted lychee meat that tastes like a smooth, milky cranberry vodka. 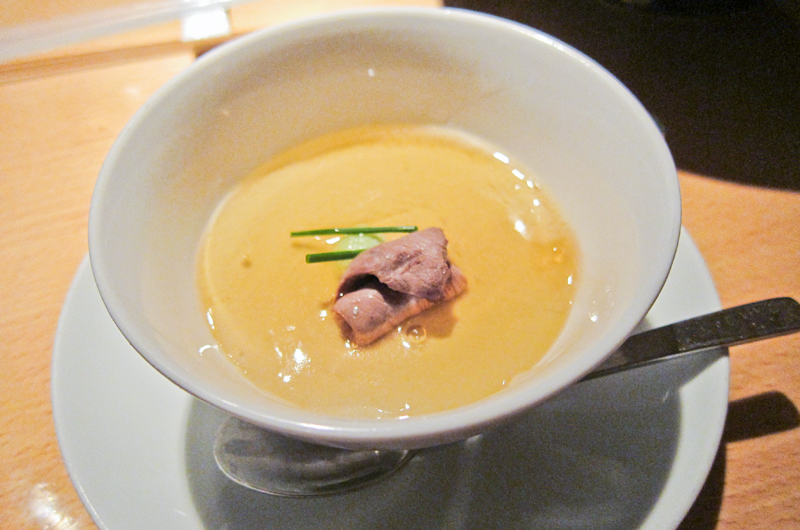 Chawanmushi is a savory Japanese appetizer made of soft steamed eggs. This delicate egg custard is normally steamed in a small tea pot with vegetables, but at Morimoto’s-it’s topped off with a slice of duck breast shabu-shabu and sweet soy sauce. Unfortunately–the foie gras was on the chewy side and I literally had to pull out the knife from my setting to cut it into pieces. The chawanmush on the other hand was soft, silky and delicious. The only problem I had with the dish was that there wasn’t more of the egg custard… also I could have done without the chewy duck meat. 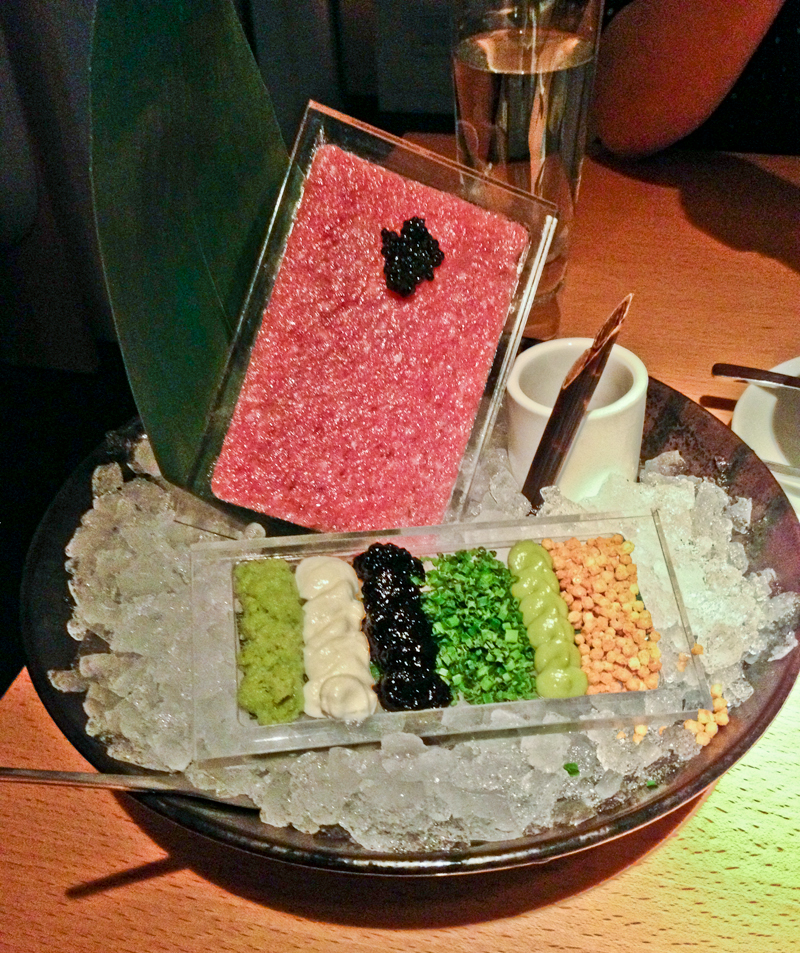 My boyfriend liked this dish so much that he wouldn’t offer me more than two bites of it! 🙁 I completely understood though, because the Toro Tartare at Morimoto’s is one of those delicious, yet painfully tiny dishes you never want to end. The toro tartare comes with a plate of tuna carpaccio and caviar (top left) and another plate of little toppings you’re supposed to eat together with a scraping spoon, including: fresh wasabi, cilantro, sour cream, crispy rice crackers and more. 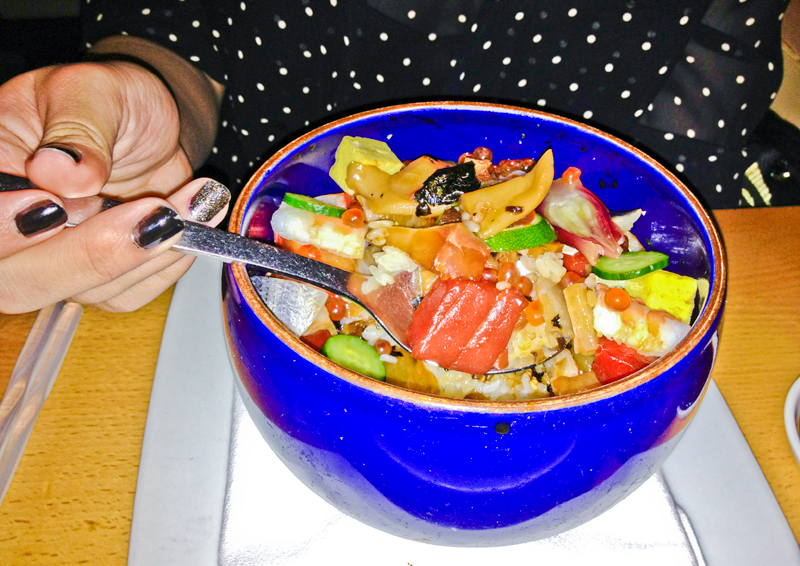 I will never imagine chirashi the same again… this was hands down the best bowl of chirashi I’ve ever had, and is probably the one thing I’d go back to Morimoto’s again for the next time I’m in New York. In fact, just editing these photos earlier today made me think about how wonderful this little bowl of sweet rice, sashimi, egg custard cubes and veggies was, leading me to try and fail at recreating it at home with leftover rice and sashimi from H Mart. I remember getting full at Morimoto’s and crying inside, knowing half of that delicious bowl of chirashi was going to waste! I begged my boyfriend to finish it for me, but he was full off of his tartar and steak. If you’ve never had chirashi before, chirashi (which literally means “scattered sushi” in Japanese) is made with soft, sweet vinegared sushi rice and a variety of sashimi, veggies and other condiments. Chirashi is made differently at several different restaurants, but at Morimoto’s–it’s made with 10-12 varieties of bite-sized sashimi (salmon, yellowtail, white fish, squid, etc), slices of cucumber, cubes of egg custard and tiny bulbs of masago (capelin roe) that burst with salty-sweet juice to cover and enhance ever bite of tangy rice, soft sashimi and sweet eggs. 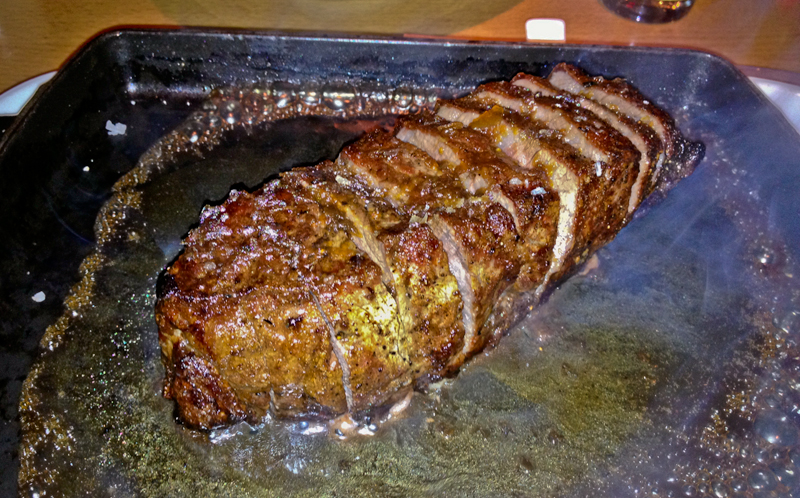 I kind of shook my head when my carnivore-cowboy of a boyfriend ordered steak at an upscale sushi restaurant opened by the Japanese Iron Chef of America–but this was amazing. The wagyu beef (pictured above) is raised and imported straight from Japan to Morimoto’s in New York. Wagyu beef comes from a Japanese cow that produces cuts of meat famous for having intense amounts of buttery marbling and a high percentage of delicious omega 3 and omega 6 fatty acids compared to regular beef. The wagyu steak at Morimoto’s arrives sizzling on a black plate with bubbling sweet onion and garlic jus.