Remember those giant macarons I found in DC a few months ago? They’re coming to NoVA! 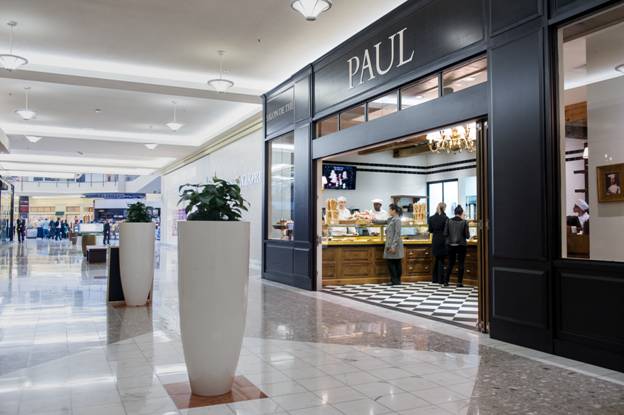 After opening their first “US flagship” bakery-cafe in 2011–PAUL’s bakery will celebrate the opening of their first NoVA location at Tyson’s Galleria in less than three days. On Monday, January 14th, the world renowned French bakery with nearly 500 stores worldwide and only five in the United States will be offering an array of pastries, quiches, crepes, paillassons (potato pancakes), sandwiches, fresh baguettes, salads and soups in McLean, VA for the first time.

Among a few of their most popular breads are Le Charlemagne, a whole wheat baguette that features a thin crust and dense center; pain 7 cereales, a fiber-rich bread made with seven healthy grains; and fougasse aux olives, (my personal favorite) a bread originating from Southern France that’s made with olive oil and chunky green and black olives.

But a few of their most popular sweet treats are giant macarons, creme-filled eclairs, crispy napoleons and seasonal fruit tarts.

The 2600 square ft. store accomodates approximately 50 with three different rooms,  outfitted with a dark folding glass wall system that opens a large portion of the bakery counter directly onto the mall itself. True to the Tyson’s Galleria spirit of luxury and fashion–the cafe is opulently decorated to invoke memories and images of Paris with antique fixtures, elegant tufted velvet accents, leather chairs and banquettes. This spring, look out for an outdoor terrace that will be added to seat patrons who wish to dine ‘al fresco’.

P.S. YES, I meant to spell macarons with one ‘o’…. 😉 Click here to learn about the difference between a macaron and a macaroon.