To get a seat in Joe’s Shanghai, you have to grab a ticket from the hostess and patiently wait for your number to be called as you stand outside on the colorful streets of Chinatown. The streets are lit with glowing signs from other competing chinese restaurants, and even a Boba cafe next door for small snacks. Don’t spoil your appetite though, because Joe’s famous Soup Dumplings aren’t the only delicious cantonese items that you’ll want to savor every last piece of. As for me, I was excited about so many of the appetizers on the first page, I didn’t even get to take a solid glance at any of the other pages on the menu. Another reason why I’ll have to revisit Joe’s next time I’m in the Big Apple.

The Chinese Scallion Pancake, the Lion’s Head, and several of the other items on the menu at Joe’s Shanghai (such as Pork Fried Dumplings and Clams in Black Bean Sauce) are just a few of the unforgettable staples of the typical cantonese child’s diet. I ate endless triangles of scallion pancakes as if they were a bowl of doritos at a super bowl party, and saw ‘Lion’s Head’ (which is a giant meatball of stewed pork) at just about every single Sunday dinner table. We ate these dishes so many times, that they became normal to our diet, and eventually – other cuisines became more interesting and exciting; which is why revisiting Joe’s Shanghai after years of hiatus from Chinese food was such a pleasant experience for me.

Scallion Pancakes: As if Chinese Scallion Pancakes weren’t already delicious from what I remembered, Joe’s thick slices of fried dough and chopped scallions were so much better than my memory of the ‘Chinese Pancake’. These thick triangles of dough were crispy on the outside, and soft on the inside with flakes of dough and scallion that you could dip in sweet soy sauce that were provided with the dish, making this the perfectly sweet and savory appetizer before the main course.

Pork Soup Dumplings: I don’t remember the last time I’ve had a good Soup Dumpling, only messes of soggy dumpling skin that were too soft and leaked soup all over the steaming pot, or dumplings that were so sticky that their entire bottoms stuck to the pans, making them impossible to pick up; which is why I instantly knew I came to the right place when I picked up a soup dumpling that did not stick to the pan, survived an accidental drop to the table, and even continued to seal in all of the soup inside with its’ thick skin that held the meat and soup in place after impact. When you first take a bite into the dumpling, a burst of pork fat and broth fills your mouth (use a soup spoon, and be careful – the soup is really hot!) before you get to the small pork meat ball at the center. Or, you could put the entire dumpling into your mouth and enjoy the burst of soup and meat without the messiness of taking small bites. Either way, this is a dish that every carnivore has to experience once in their life. There’s absolutely nothing like a perfectly crafted and steamed soup dumpling, and Joe’s Shanghai clearly has the secret formula to making the best ones in Chinatown, New York.

Lion’s Head: who’s name derives from the large size of the minced pork meatball (not from an actual lion), is a traditional chinese dish that originates from Huaiyang cuisine. There are two ways that the chinese cook ‘Lion’s Head’: the first is the way I’ve had it since I was younger; the ‘white’ or ‘plain’ way, where the large minced pork balls (ranging from 7-10cm wide) are stewed or steamed in clear broth and vegetables. Joe’s Shanghai cooks the ‘red’ version, where the soy-braised pork balls are stewed with thick brown sauce and cabbage. The minced meat comes from fatty pork, making the meatballs soft and savory with each bite, which goes perfectly with a bowl of rice. 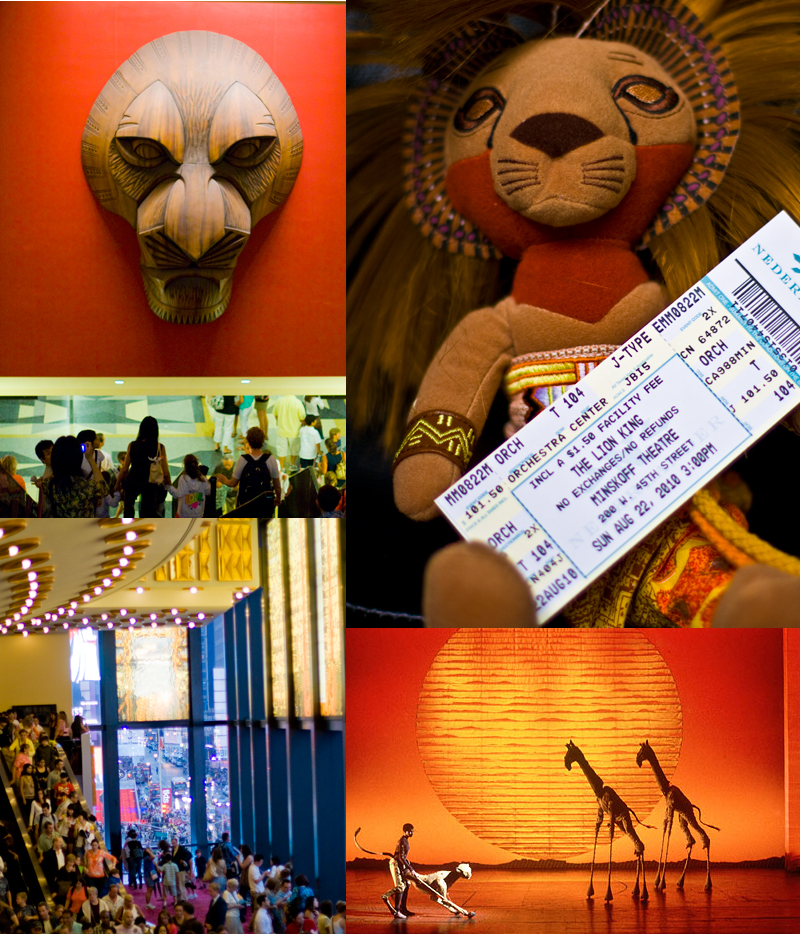 Speaking of Lions and Childhood, I was fortunate enough to have the chance to watch The Lion King on Broadway; one of the most popular musicals that has been described to be like “being in a dream, awake” (The New Yorker). We waited and crossed our fingers in the cancellation line, and it all turned out to be absolutely worth it. Let’s just say it’ll be hard for me to ever want to watch any other broadway musical after having experienced the spectacle of the Lion King at the Minskoff Theatre. The music, the puppetry, the scenery, and every other work of art involved in this outrageously creative spectacle brings you back to childhood, no matter how old you are, or how long ago you’ve last seen the Lion King on TV. In the first 10 minutes of the musical, dozens of large, colorful life-sized puppets of animals and flying birds twirl and crawl from all sides of the theatre, first and lower floor, flooding the velvet walkways with all kinds of creatures from the animal kingdom to fill the stage and set the tone for one of the most breath taking shows you’ll ever experience on broadway (which will also be touring to cities such as Las Vegas, Chicago, London, and even Singapore). This is a must see if you’re ever in New York City, and whether it be slurping soup dumplings or enjoying the Lion King on stage – you won’t regret experiencing either of these in New York City at least once in your life.

Would you hop into this freezing cold pool in Sout

Happy Friday 🤍 Got to borrow one of @cathsimar

The prettiest water source I’ve ever come across

Well this def wasn’t a hot spring, and I normall