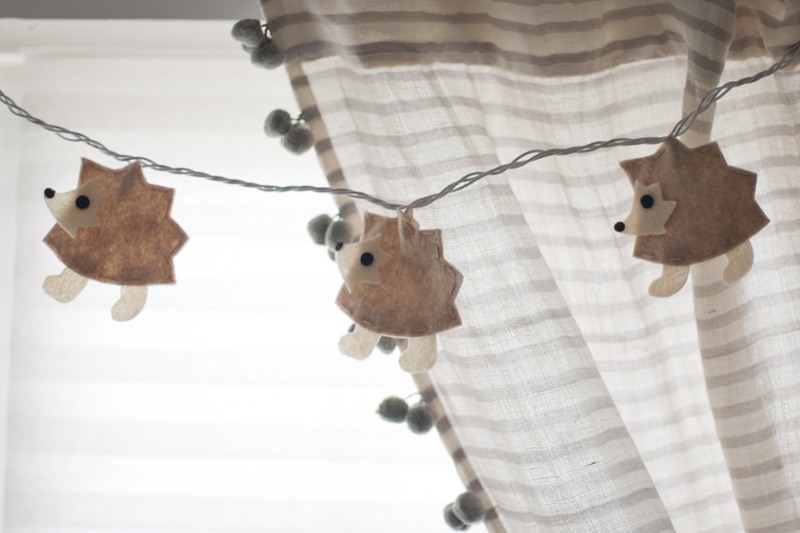 { Night Light Alternative }
We had just finished putting together Colt’s crib the weekend before my water broke, and most of the room was still empty when I left for the hospital. After four days of bed rest and labor, Colt was born about eleven weeks early and was sent straight to the NICU. I was sent home a few days after, and got to put the rest of his nursery together while I waited for him to come home. I was pretty down about not being able to take him home, so putting together his nursery was my way of pouring all of my love for him into a positive project during the days we were apart. Needless to say,  I went a little overboard and it’s now the most decorated room in our entire house.  Most of the pieces of his nursery were handmade and put together either by me, Bub, my parents or an artist from Etsy. I’m so happy with how Colt’s nursery came together, and I hope he enjoys it as much as we do. Below are some of my design choices and resources. 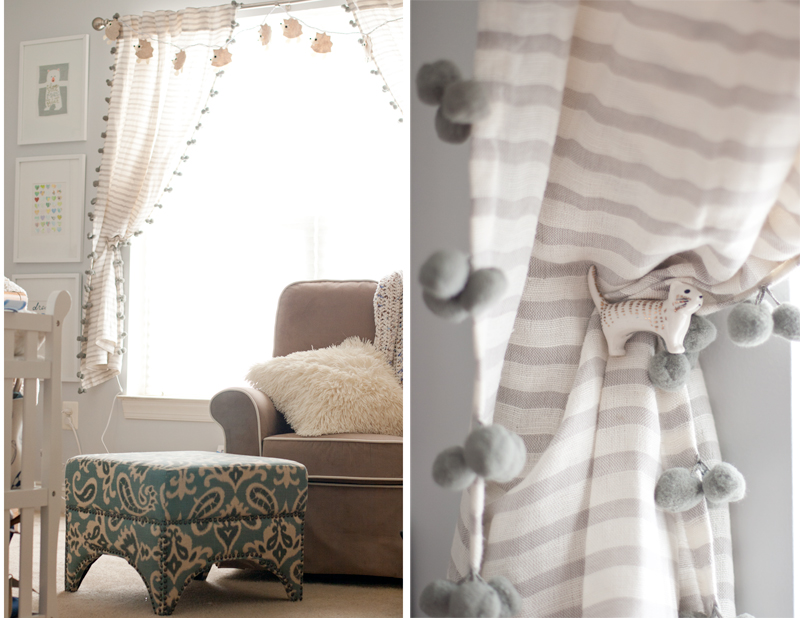 {Grey & White Details }
New mamas know how important it is to have a comfortable place to sit and relax with your baby during feeding time, and having a soft rocking chair with an ottoman was key for me. Paired with a soft blanket and pillow – it makes 3 am feedings go by a lot faster when I can feed Colt in my arms comfortably and catch up on hulu with my iPad on the ottoman. 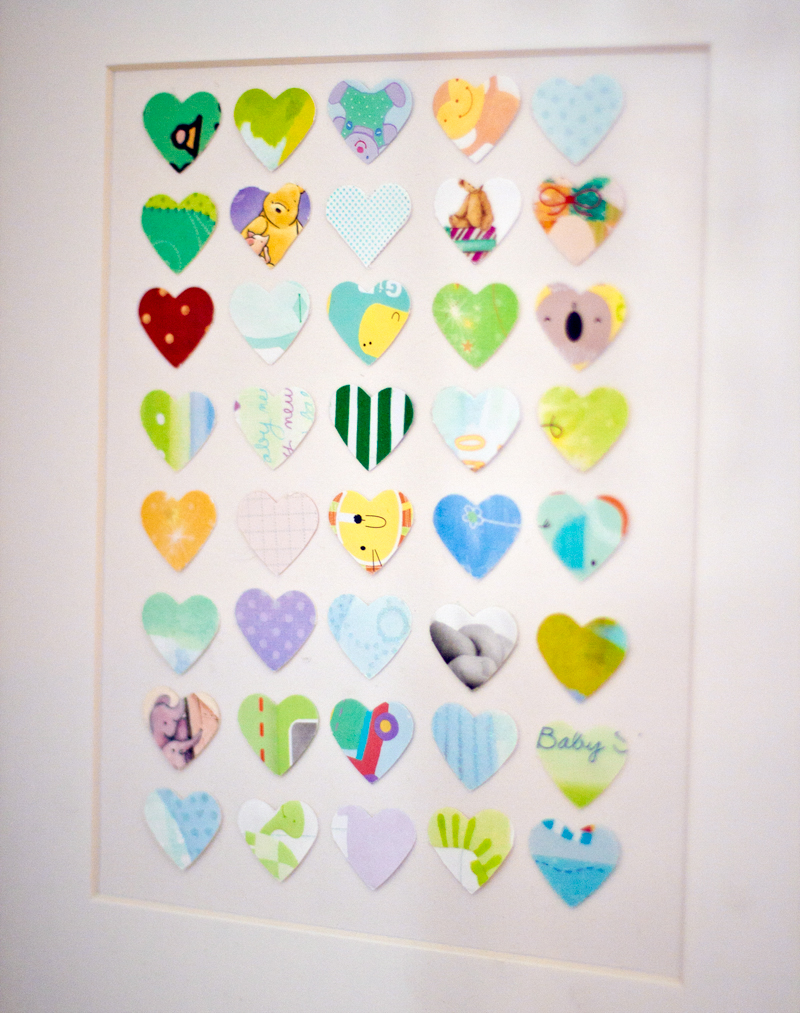 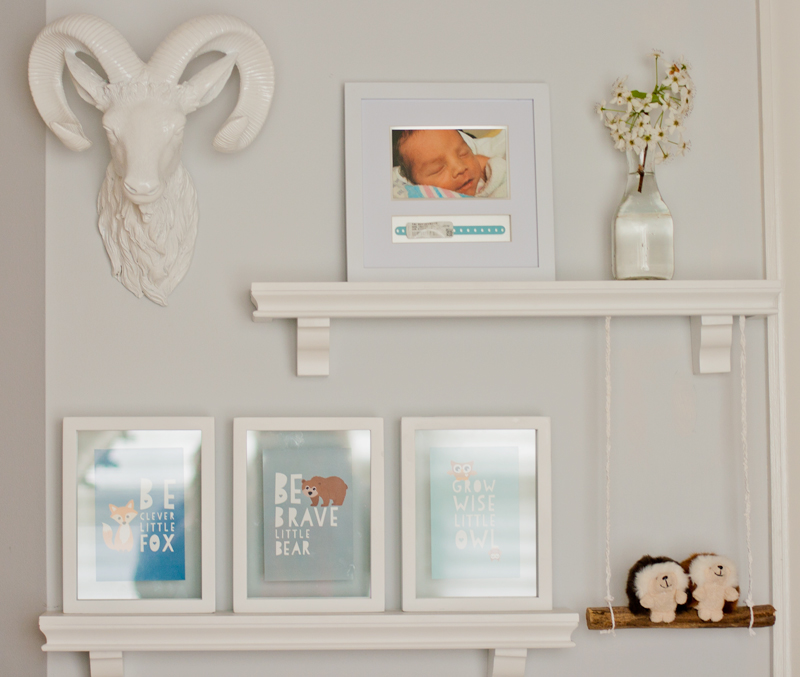 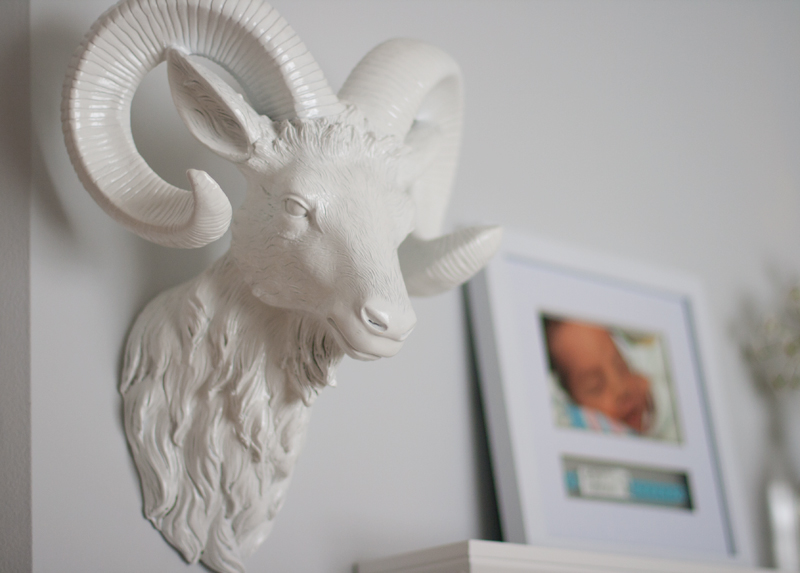 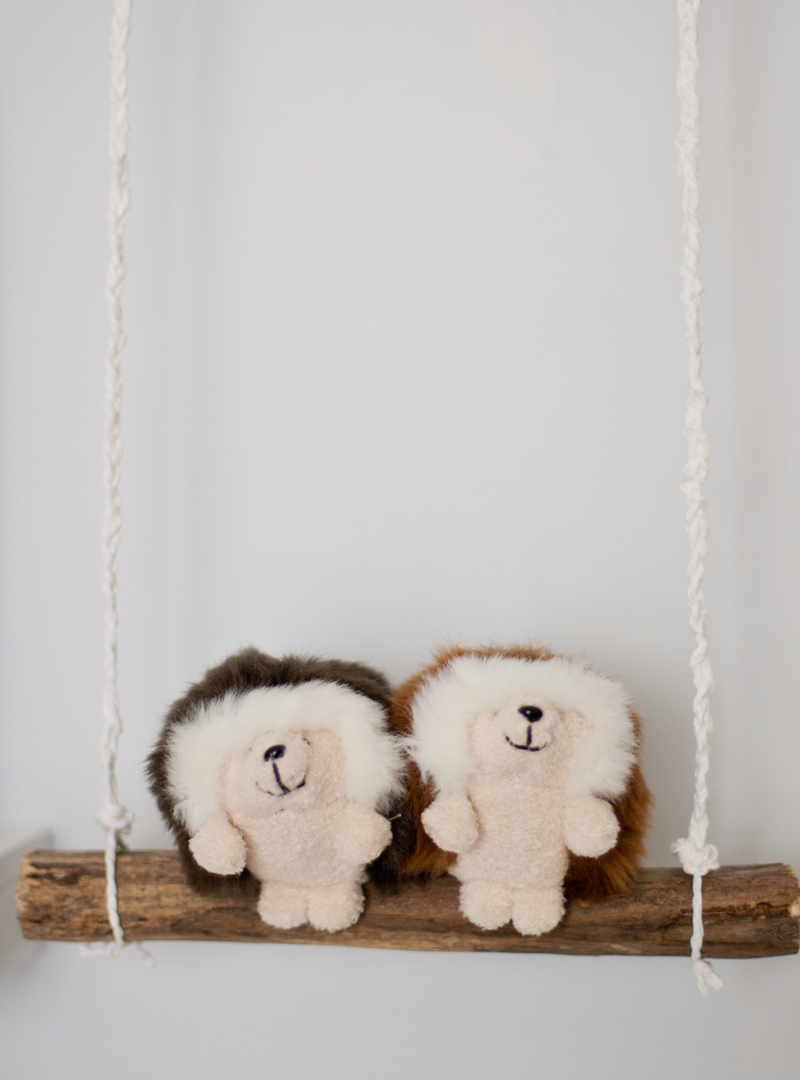 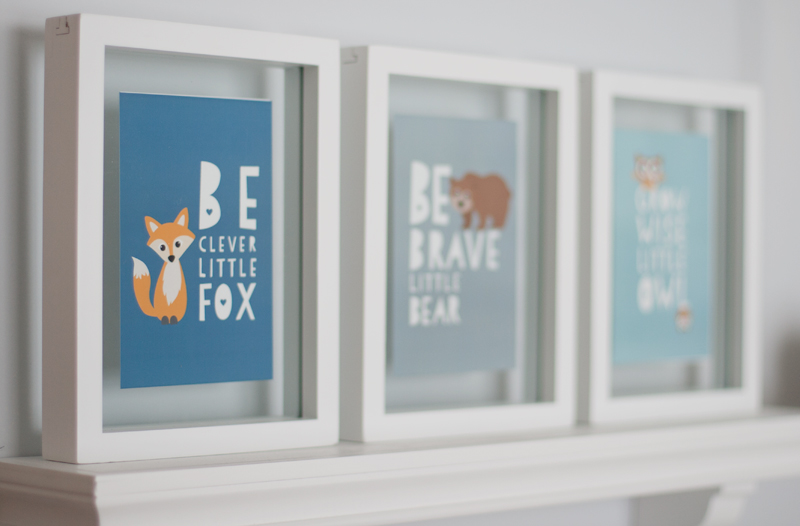 { Above Colt’s Changing Table }
Colt was born on the first day of the year of the Goat, so I decided to add a pretty little ceramic plaque above the changing table, along with a place for fresh flowers, a frame for his arm band from the NICU and some colorful artwork with words of inspiration. The wooden swing was made from a long tree branch that Bub found from our neighborhood while we were walking Winnie. We brought it to my dad, who sawed it into its current form, then tied some string to each end to create a little swing for the baby hedgehogs we bought from the hospital where Colt was born. 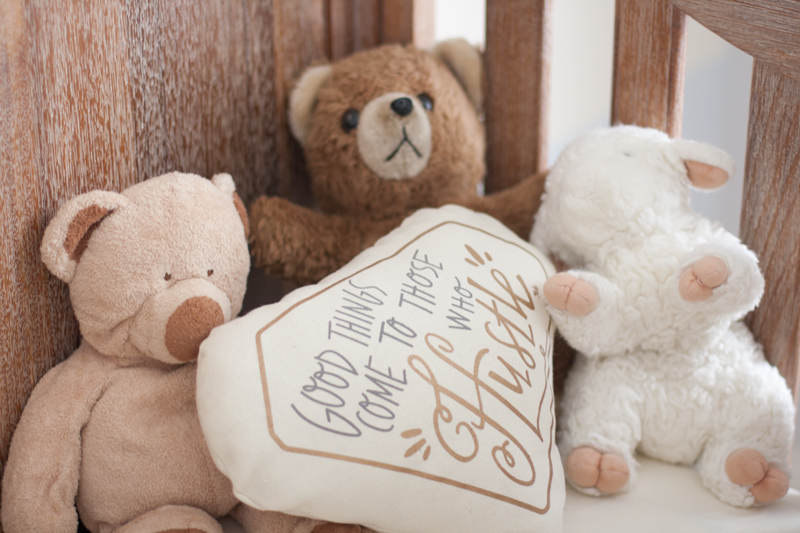 { Mom & Dad’s Childhood Buddies }
One of the sweetest gifts that Colt’s grandparents gave him, was a special little bear his dad loved when he was younger, named “care bear”. Bub petted this bear so much when he was younger, that the fur on the back of the bear (middle) is literally matted down flat.

To the right is a little lamb I begged my mom to buy me from FAO Schwartz when I was little. I remember being so happy when she finally said OK, that I hugged that lamb all the time and brought it with me everywhere. I held the lamb so tightly in the middle that all of its stuffing dispersed to the top and bottom, causing it to have a giant bum. 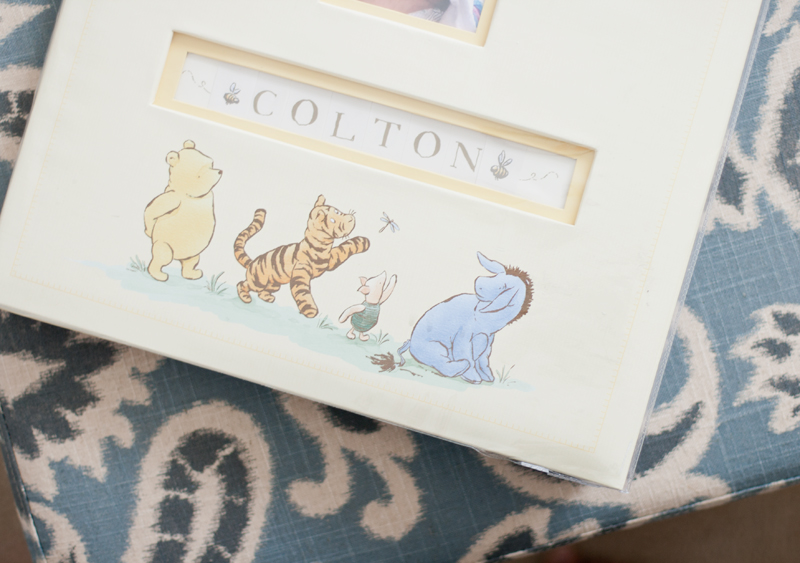 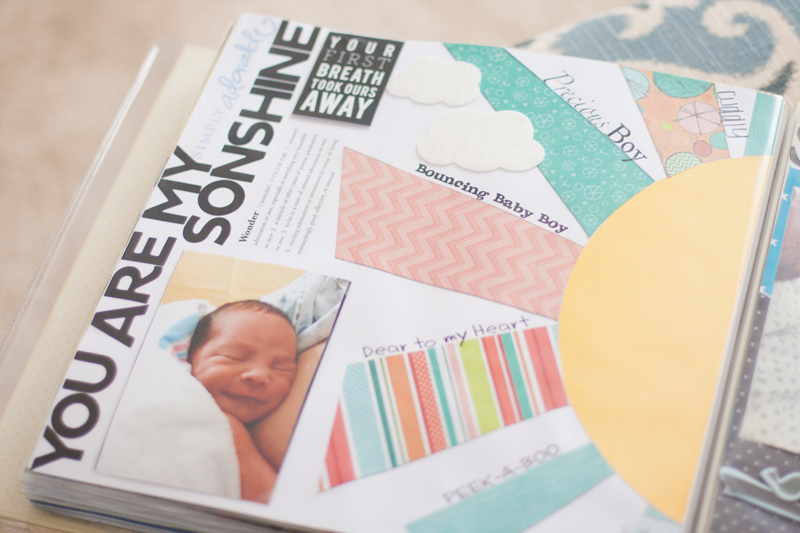 { Colt’s Scrapbook }
One of the most thoughtful gifts we received at Colt’s baby shower was a scrapbook filled entirely with pages put together by Colt’s talented Aunt Amy. I always thought I was creative… but the pages Amy came up with in Colt’s scrap book were pages I could have never thought to put together on my own. You can tell she paid very close attention to detail and dedicated much time to Colt’s scrapbook, and I can’t wait to show it to him when he’s older and let him know how much his Aunt Amy loves him. 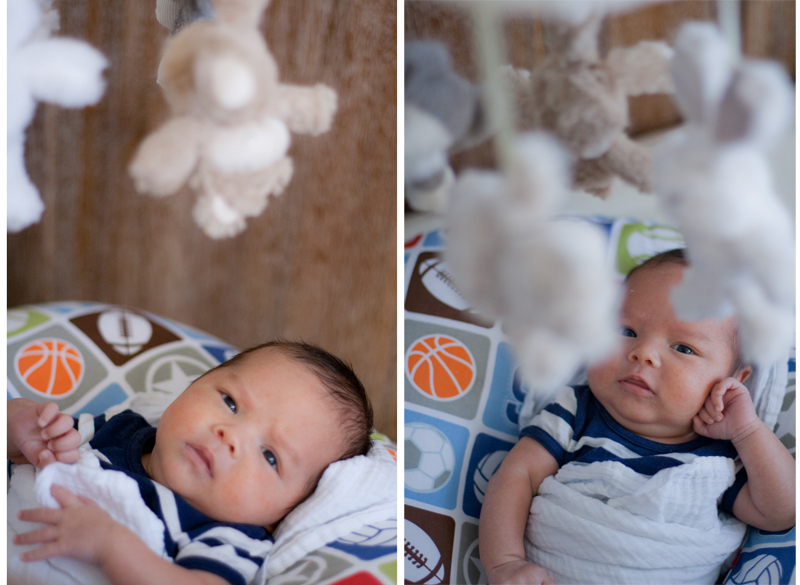 { Colt’s Crib }
During the day, Colt loves to be propped up in his boppy, watching his musical mobile twirl above. I couldn’t find his mobile online (sorry!), but below are a few shops I love for mobiles and boppy covers. 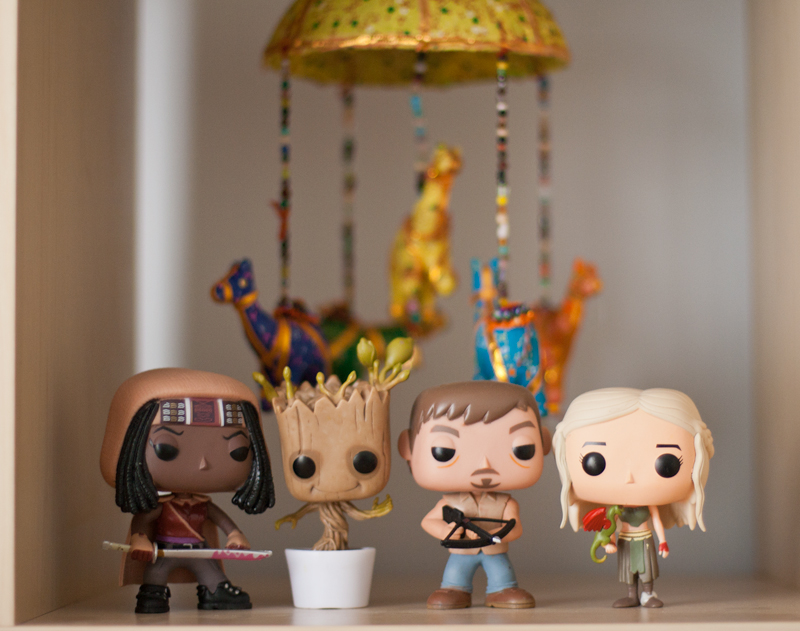 { Colt’s Dreamcatchers }
Colt’s very first gift came just a few months after I found out I was pregnant. His Auntie Karen was the first person I told when I learned I was pregnant (after Bub of course), and when she came home from her trip to Morrocco – she brought home a beautiful mobile with colorful camels and gold trimmed details. It now dangles above Colt’s little dream catchers that his daddy bought for him – pop figures of our favorite TV heroes.

Putting together a nursery isn’t an easy task, but you can find a lot of inspiration and ideas on pinterest. Once you pin your favorite ideas, you can decide on a theme to start your project. This is the board I put together that inspired Colt’s nursery. Enjoy!