Opened in 1989, Thai Pilin was the very first restaurant to serve Thai cuisine in Fairfax County, and was also where I had my very first bite of Pad Thai. I remember, because my older cousin Vinny and Farrah took my little brother and I there to check out their friend’s new restaurant the Summer before I entered sixth grade. We drove into a giant shopping center and parked in front of a little cubby-hole of a restaurant that was sandwiched between what used to be a giant “Tower Records” store (before CD’s were replaced by mp3 players), and a giant bike shop I’m pretty sure is still there today.

A few decades went by, dozens of more Thai restaurants sprung out and around the Northern Virginia area serving everything from “chicken lollipops” to something called “pikachu noodles” to taint my image of Thai cuisine, Thai pilin changed management and went a bit downhill, and it wasn’ t until last week that I met an original Thai-pilin-veteran who inspired me to give Thai cuisine in NoVA another shot.

The Thai native recently decided to try his own hand at bringing NoVA’s Thai cuisine back to its original roots, and I met with him and his business partner to go through ideas for his upcoming restaurant’s website (which unfortunately, I can’t give out any details about until it opens later this Spring!) when he asked me where I go now for Thai food.  I had to swat away the image of the horrible soy-sauce splashed plate of broken noodles I had the week before at a Mclean-based Thai restaurant that immediately came to mind. Instead, I named a few I’m sure weren’t up to a native’s standards, and immediately brought up my full intentions to stop by Little Serow and Thai X-ing this Summer before he stopped me and told me to check out  a little restaurant hidden in the outskirts of Arlington. Thai Square, he told me, has the most “authentic” Thai dishes in the area, and serves dishes you won’t find anywhere else in NoVA.

Obviously I dragged my mom and popo out to stop by immediately after the meeting.

I tweeted about where I was headed for lunch, and another Thai food enthusiast, the makers of Apinya’s Thai Hot sauce (@ApinyaCo) tweeted back with approval…
Side note: to read more about Apinya, check out an article I wrote about their all-local hot sauces in the latest print issue of Northern Virginia Magazine.

Determined to get the full experience of enjoying unique Thai dishes you apparently can’t find anywhere else in NoVA, I didn’t let myself order pad see ew at a Thai restaurant for the first time in years. Instead, I texted the TP-veteran, asking him what I should get. He suggested a Thai noodle soup that came with crispy pork rinds and an opaque broth, a pot of clear cellophane noodles and giant prawns, bone-in catfish and a few others I’ve listed below. You get a peak of Thailand’s original, exotic flavors in dishes like the crispy catfish (which uses rhizome and thai eggplants) and even in their taro dessert dish, which features pandan-leaf flavored bulbs of rice cake.

P.S. You won’t see “drunken noodles” on the menu, because it’s labeled in Thai as “pad kee mao.”

1) Nam Sod (Spicy Pork Salad)
My mom is currently attempting to recreate this at home, because it’s snowing and we can’t drive out to get the real thing from Thai Square. This sour, cheek-pinching  salad packs a great amount of heat that hides under the tart lime and vinegar dressing. This spicy sour dressing lightly coats a handful of minced pork, gelatinous strings of pork rind, fragrant shards of ginger, scallions, cilantro and crunchy peanuts. It’s addicting and refreshing, but if you eat it too quickly–your mouth will be on fire before you know it.

2) Thai Iced Tea
Order this if the spicy pork salad has your mouth in flames. The sugar and creaminess of the cool Thai Iced Tea will put out the flames from the thai chilies and acidic lime juice from the Nam Sod.

3) Potpourri Shrimp & Bean Threads
I should probably point out that the shrimp in this dish are huge… kind of like blowing up a balloon to its full capacity and then sneaking a few more breaths in–you can see the shrimp meat bursting from its shells, because they’re so plump and fat. I love giant shrimp, because the meat is almost crunchy when you bite into it–like lobster tail meat. The “potpourri” shrimp is cooked in a clay pot with soft, translucent bean threads (imagine vermicelli noodles made of jelly), musky shiitake mushrooms and stalks of crunchy scallions.

4) Pad Ped Pla Dook (Crispy Catfish)
Popo and my mom made fun of me for giving up on this dish. They called me a “typical American girl”, because I was turned off by the fact that the catfish still had bones in it. There isn’t much I won’t eat or try (I swear…), but there’s something about having to chew something and then spit parts of it out but then have to continue swallowing the rest of it that completely turns me off. I’d love this dish if it were boneless, but this is a very traditional way of cooking fish, and I’d suggest it if you have the patience and stomach to handle it. It’s sauteed in spicy chili paste with fresh chili peppers, exotic Thai eggplants (sliced green bulbs that are a softer version of green tomatoes) and tangy rhizome (a pungent, thinner cousin of yellow ginger). “This is how the REAL natives eat fish!” my mom told me, plucking little bones delicately from each chunk of catfish. I picked around for eggplant instead.

5) Floating Market Noodle Soup
This was my favorite dish! It’s named after Thailand’s world-famous “floating market” where goods are sold from boats (remember this, ANTM lovers?), and it’s also the first bowl of noodle soup I’ve met that was ingeniously topped in one of my absolute favorite snacks… crispy fried pork rinds… aka deep fried bacon… Anyway, the soup comes with thin or wide noodles (I chose the soft wide noodles they also use for pad see ew), bean sprouts, strips of beef, thai chili paste, beef meatballs and comes with a rich beef broth that’s opaque with flavor and various seasonings.  P.S. Here’s a video of the actual “boat noodle soup” being prepared at the real Floating Market in Thailand. 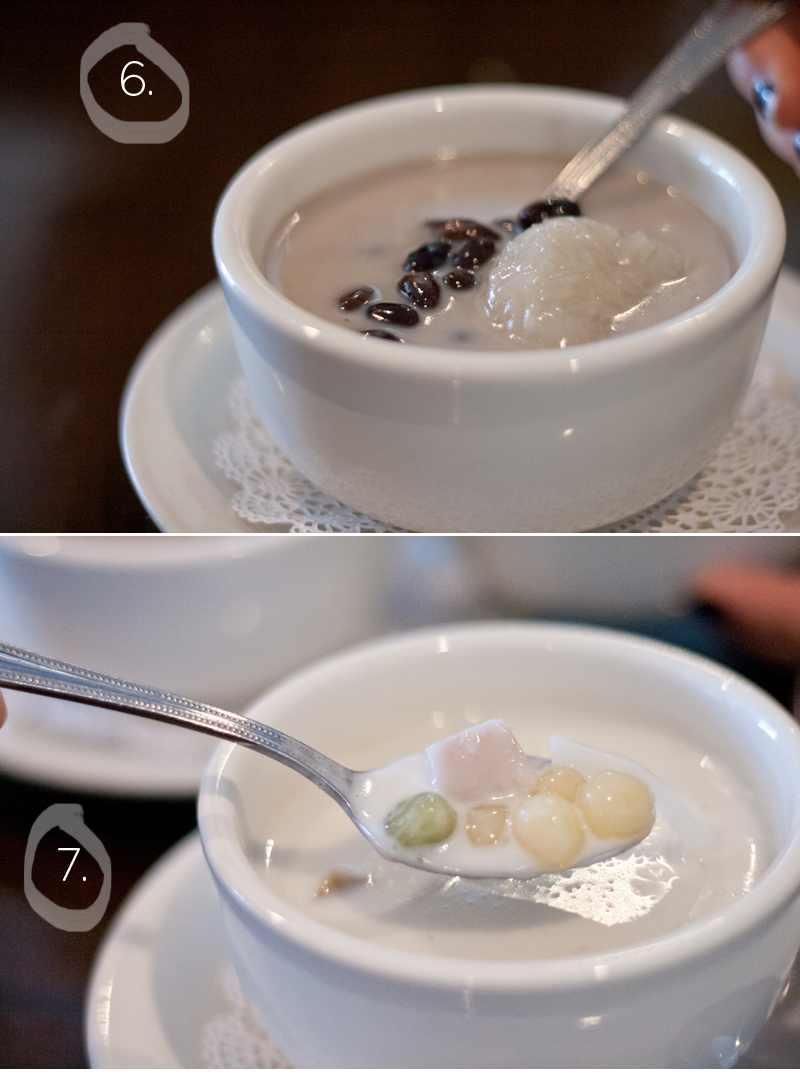 6) Sticky Rice & Black Beans
My salt tooth is bigger than my sweet tooth, so desserts like this are perfect for me. The salty sweet combo of black beans, coconut soup and sticky rice is oddly addicting.

7) Coconut, Taro & Pandan Leaf Rice Cake Dessert
Pandan leaf! The very first time I had anything pandan-leaf flavored was when I ordered a box of Michel’s macarons, and he gave me an extra bag of a featured flavor (the exotic pandan leaf) he was currently working on. Pandan leaves are grown in Southeast Asia and are used to weave mats and boxes, but can be cut into strips to infuse with desserts like ice cream and cookies to give it an aromatic edge that tastes like a mix of banana and basil. The little green bulb in the photo above is a pandan leaf flavored rice cake in coconut soup with lotus seeds and cubes of taro. This dessert is a special treat on the menu I’m not sure is going to remain permanent (it was written on the back of their daily specials), so if you see it–check it out!