Many of the dishes at Annandale’s token Chinese restaurant are also known as “street snacks” from Taiwan’s famous “night market”. At these markets, you’ll find pan fried dumplings, fried chicken and scallion pancakes cooked in front of you and sold on a stick or wrapped in paper. Other dishes from the menu, like soup dumplings (xia long bao) and peanut noodles (dan dan mian) originate from other parts of China, like Shanghai and Chengdu.

There’s a reason why this homey twelve-table  hole-in-the-wall has outlived the other spaces in its complex (which have sifted through dozens of gift shops, grocery stores and bakeries that have never lasted more than a few years), and it’s because A&J is one of the only few Chinese restaurants in the area that represent Taiwanese, Shanghai, Sichuan and other regions of cuisine in China, while most in NoVA are Cantonese or Hunan restaurants. In other words, you won’t find beef chow fun, fried rice or orange chicken here. A&J doesn’t just stand out among its neighboring Korean competitors in Annandale–it’s one of the only spots in NoVA where you can find cheap, Chinese comfort classics, like traditional five spice fried chicken, soup dumplings and peanut noodles. This is one of NoVA’s oldest gems, but is worth writing about because it’s just as good as I remember, and still offers classic comfort dishes I crave that can’t be found anywhere else in the area. 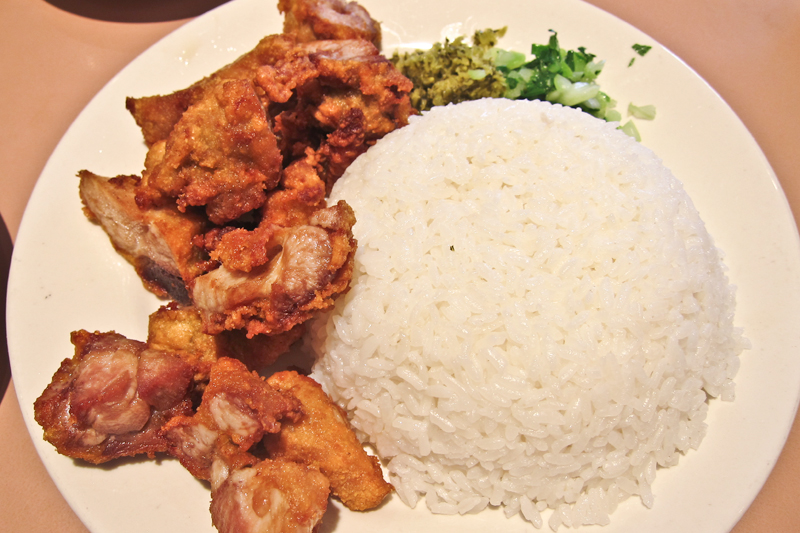 1) Five Spice Fried Chicken (Ji Pai Cai Fan)
The crispy fried chicken at A&J is made from lightly battered cuts of dark meat chicken and served with pickled mustard greens and marinated veggies to mix in with your rice. It’s a lighter variation to its Korean double-fried competitor down the street, but is also packed with flavor and won’t let you stop at just one piece. Fried chicken gets a little repetitive, but if you mix in the veggies with the rice and eat them together, the starchy rice and acidity from the pickled veggies offsets the greasiness of the chicken when you want to eat more than just a few pieces. 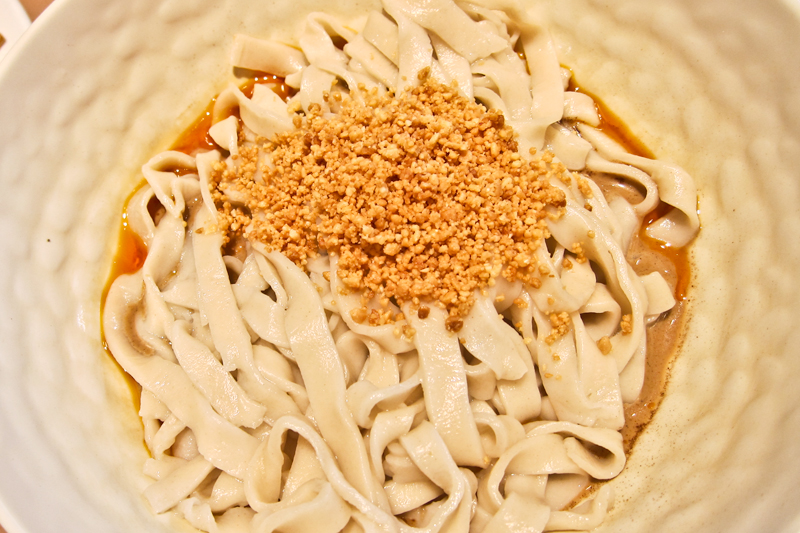 2) Warm Peanut Noodles (Dan Dan Mian)
The peanut noodles at A&J are served with either thin or thick noodles (we chose thick) and comes with house-made peanut sauce, chili oil and crushed peanuts that you’re supposed to mix together. Hover over the image above to see the aftermath. Peanut noodles is a Sichuan-style dish that is both sweet and savory with a tiny kick of heat. At home, I like eating this dish with bean sprouts and sliced cucumber (which you can also ask for on the side). 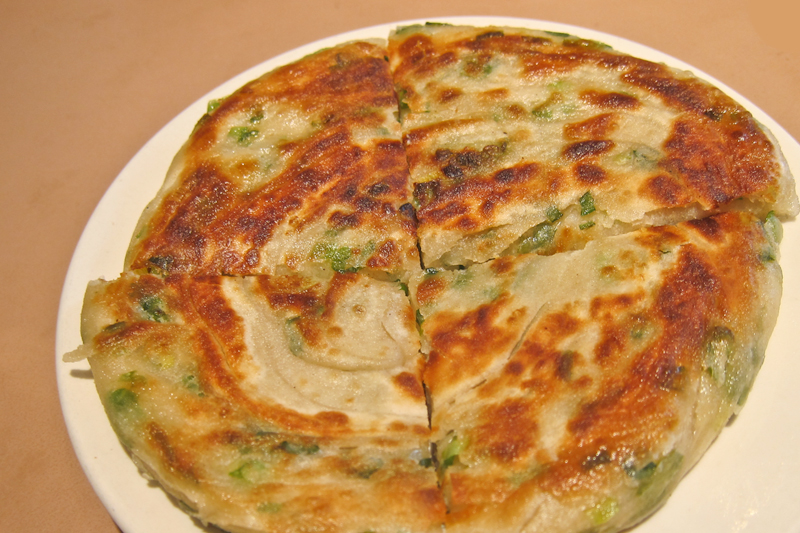 3) Pan Fried Scallion Pancake (Cong you bing)
This is something my cousins and I used to fight over when we were younger. You notice how they cut it into four squares here? For some reason, we would only order one or two orders of these (for me and six other kids), cut these into slivers of eighths, and I’d normally have to scarf down my first piece to even think about getting a second one. These addicting little triangles are cut from thick, savory pancakes that are crispy on the outside and tastes like biting into dozens of buttery, thin layered crepes with salty bits of scallions speckled in between. This is one of my favorite Chinese appetizers and I always get a little excited when I see it on the menu. Although nowadays, I have to limit myself to one or two pieces, because they’re very filling and I have a natural tendency to eat too many of these too quickly! 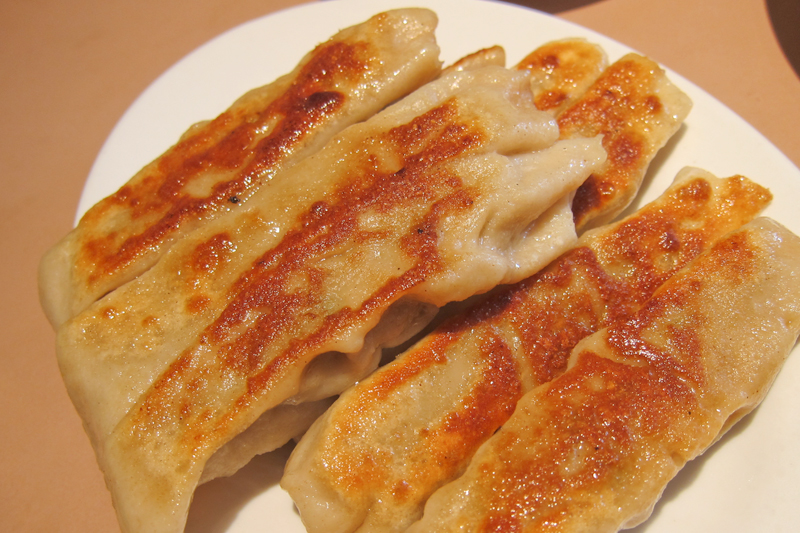 4) Pan Fried Pork Dumplings (Guo Tie)
The pan fried pork dumplings here are long and narrow, while most of the variations you’ll see at Cantonese restaurants are short and chubby. Both have a juicy pork filling and are wrapped in thick dough–but the pork dumplings at A&J are a little larger, and the filling is a lot less likely to pop out or escape, making it a lot more handheld-friendly than its rounder, chubbier cousin. 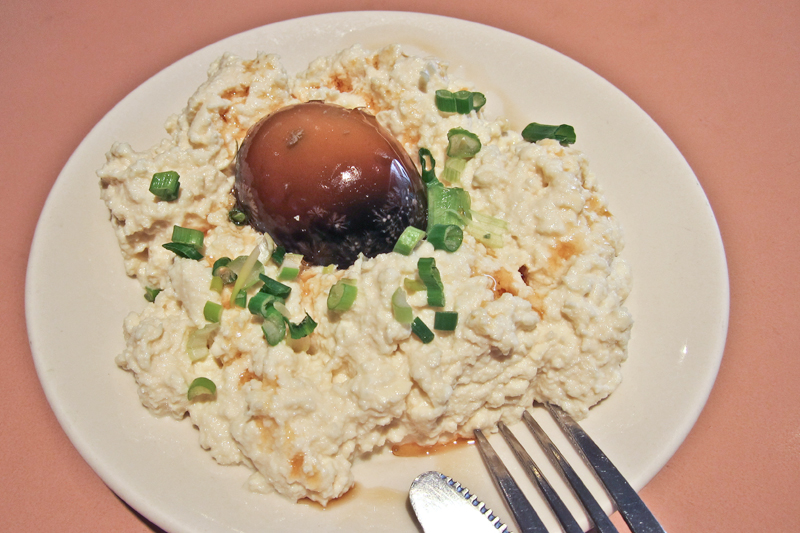 5) Thousand Year Old Eggs & Silky Tofu (Pidan Doufu)
You won’t find this dish anywhere else in NoVA, which is why I order it every time I stop by A&J. I know… this one might belong in the WTF Delicious category from the looks of it, but comfort food isn’t always smothered in butter, battered and fried. Comfort food invokes nostalgia and sentiment, is (usually) soft in consistency and packed full of flavor. This peculiar comfort classic covers all of those bases. “Pidan doufu” is made of silky tofu, chopped scallions, sesame oil and…yes… an ugly–misunderstood–preserved egg. What you’re supposed to do is cut up the egg with the knife and fork you’re given with the dish (hover over the image above for the aftermath), mix it all up and eat it by the spoonful. The result tastes like soft, silky scrambled eggs with fragrant bits of scallions, rich, buttery yolk and a whirl of sesame that fills your nostrils. I hate when people say “it’s an acquired taste” (because I can’t imagine someone saying it without their nose tipped up), but be warned–this dish isn’t for the faint of heart. I refused to eat it when my mom made it her mission to open my mind to other things on the menu (that weren’t fried or carb-heavy) and forced me to take a bite of this when I was a tween. I’ve loved it ever since, and dishes like this are why I keep an open mind when I see something crazy on any menu. 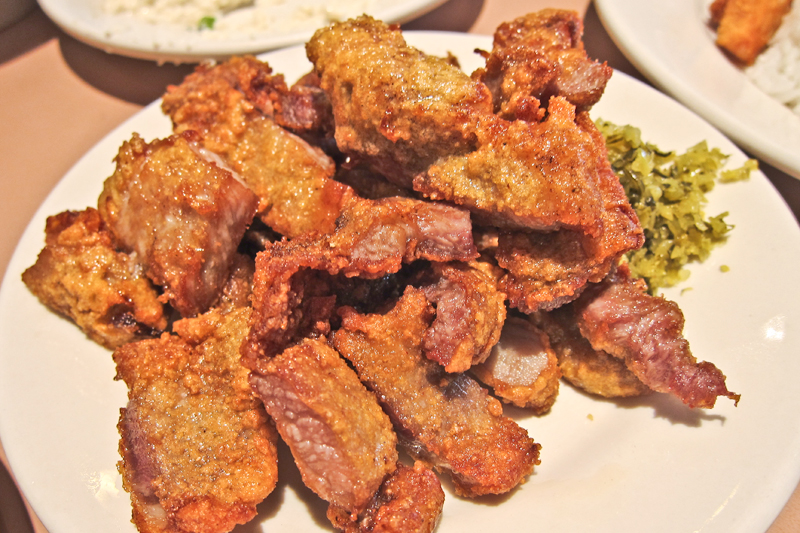 6) Five Spice Fried Pork Chop (Pai Gu Fan)
This is one of my favorite comfort picks, because my grandmother used to make this a lot when I was younger, and having it always makes me feel like I’m sitting in her tiny old kitchen. It’s very similar to the fried chicken (#1) and is also served with mustard greens. Both are really crunchy, never soggy and very tender and juicy.

P.S. A&J also has a location in Rockville, MD!