I should probably include a little disclaimer that this review may be a tiny bit skewed. You see–I grew up thinking  that all ramen came from shim-yun packages and styrofoam cups. In fact, I didn’t realize–until a few years ago–that you can actually order authentic, Japanese ramen at a restaurant–just not anywhere in NoVA,  until now of course.

But no, this review isn’t skewed because I had only eaten instant ramen before visiting Annandale’s newest ramen house–it’s because the very first time I had ramen (at a restaurant) was at Japan’s very first American ramen implant–Ippudo, a popular chain that kick started their massive following [SeriousEats] with a ten seat bar that opened October 15th, 1985 in Japan.

Last Summer–I went on a ramen crawl in San Francisco and fell in love with the rich, creamy tonkatsu ramen broth at Suzu in Japantown and almost cried into my bowl when  Katana Ya introduced me to deep-fried-chicken ramen at Union Square.

Like a true redskins fan–I had deliriously high hopes for NoVA’s first ramen house, even though deep down I knew the chances were slim that it would even compare to the last few bowls of ramen I had during my summer trips to America’s most ramen-packed culinary powerhouses.

With that said–Tanpopo was already at a pretty big disadvantage to begin with when I first heard about it last December. I’ll put it like this..while there are many people who are perfectly fine with, say, bud light–it just tastes like water if you had been drinking thick, rich, flavor-packed craft beers for two years beforehand. So instead of talking about whether I liked it or not, I’ll explain the menu, the ramen options and what everything tastes like. 🙂 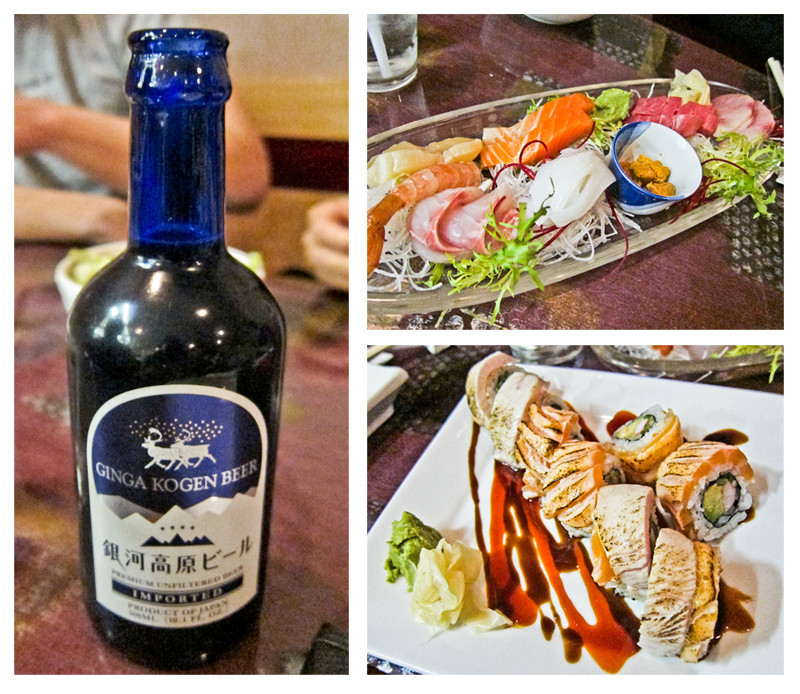 1) Japanese Imported Beer
Ginga Kogen is a Japanese craft beer that built their first brewery in the snowy “Sawauchi” village of Japan in 1996. This aromatic, unfiltered Weizen has a name that means “plateau of the galaxy” and comes in a pretty dark blue bottle. It smells like apples and tastes light, crisp and refreshing–but for $15 a bottle, I’m not sure that its price tag and value would win a second round against a cheaper contender, or a glass of spiked apple-flavored seltzer.

2) Sashimi Moriawase
The sashimi moriawase comes with tuna, salmon, white fish, yellowtail, squid and octopus. Since their main focus is ramen, I guess I can understand why they serve frozen sashimi. However–if they ever find themselves on Kitchen Nightmares with Gordon Ramsay any time soon, they’re going to need to either step up the quality of their fish selection, or omit sashimi from the menu altogether, because Chef Ramsay would not be too pleased.

3) Volcano Roll
Bub loves spicy grub, so he skimmed the “designer rolls” for one that promised to pack the heat. The volcano roll is basically a california roll wrapped in seared salmon (that was nearly cooked through 🙁 ) and drizzled in lots of sriracha and plum sauce. If you don’t like the idea of raw fish, but want to try sushi for the first time–this would be a good start, because a california roll doesn’t contain any raw meat and the salmon on top is seared. 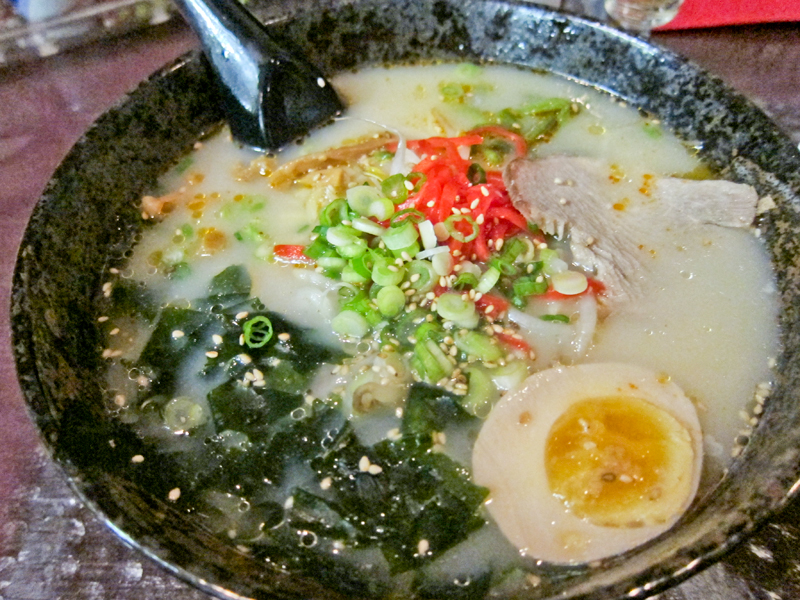 4) Hokkaido Miso Ramen
The hokkaido miso ramen comes in pork bone broth and is topped with bamboo shoots, half of a tea-boiled egg (which explains its brownish color), seaweed, scallions, bean sprouts, corn, sesame seeds and one or two pieces of chashu (sliced pork)… so… if you want more meat, be sure to ask for an extra order of chashu, because they don’t give you more than that. Mine only came with one. 🙁 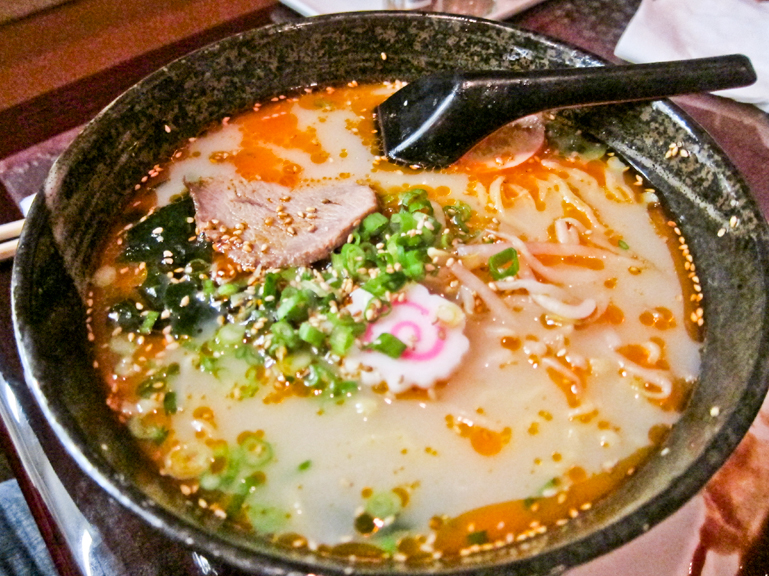 5) Nagasaki (Spicy) Ramen
Once again, Bub ordered the spiciest candidate on the list and got the spicy pork-bone broth ramen that came with bean sprouts, bamboo shoots, seaweed, scallions, a slice of chashu, sliced fish cake and topped with spicy red oil (their way of adding spiciness to the soup). He wasn’t all too pleased with the level of heat, so he ordered another dish of chili oil to pour into his soup. Not sure if I enjoy the fact that they only have one single greasy solution when it comes to adding heat to their soups. 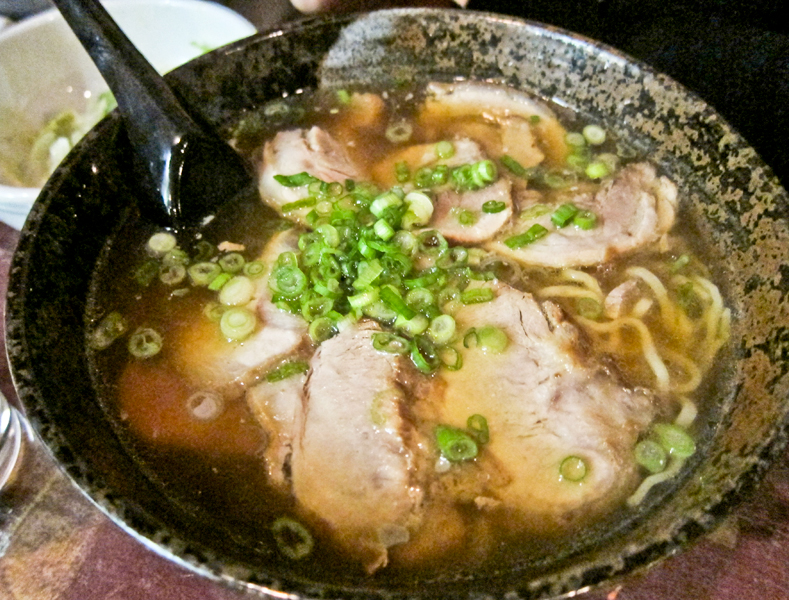 6) Kyushu Tonkatsu Ramen
The kyushu tonkatsu ramen comes with a salt-flavored broth, which is one of the most traditional ways of cooking ramen. Though it doesn’t come with many of the toppings mentioned in the other ramen options (only a fist full of chopped scallions as you can see), it does come with a lot more chashu.

Overall, I’m impressed that they stayed true to the original recipes (salt, pork bone and miso) and I’m happy to say that the noodles aren’t bad either. They were thin, soft and had a little bit of elasticity to them–but I am a little disappointed with the lack of flavor in the broth… also, I’m still a little bitter that I got two pounds of vegetables, but no more than one slice of meat with my ramen… I mean, what a tease!!

P.S. Want to know how to make a quick chopstick rest to keep the tips from touching the table? I’ll show you how to make one with paper in the video below! All you do is take the paper the chopsticks came from and fold–something my dad taught me when I was little.